“What The Health” Documentary Review

The Documentary “What The Health” is a mind-changing film to those who are ready for the powerful truth about the reasons to go plant-based. 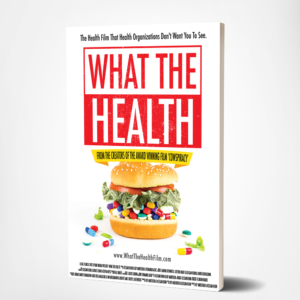 The film centers around Director and Screenwriter, Kip Anderson, and his quest for answers from U.S. health organizations and the animal food industries. Anderson is a Vegan Filmmaker Activist who has done extensive research on food that heals and food that harms.

In this Documentary, “What the Health,” the viewer follows Kip on his quest to uncover the “secret” cure to chronic and terminal illnesses: Plant-Based Food Only. For what seems like basic questions he asks to doctors, food companies and major health organizations supposedly giving out accurate health information to the public, he is met with brick walls and legal debates. The so-called “hard questions” that Anderson is inquiring focus on why there is so much emphasis on meat and dairy when these foods have been proven to deteriorate health and cause diseases. How can meat be part of a healthy diet when it is a carcinogen? Why aren’t doctors telling people with diabetes, heart disease, and cancer to change to a plant-based diet instead of prescribing a cocktail of drugs?

What really shocked me is how unwilling business and medical professionals were to talk about diet as a method of healing.

Anderson discovers how deeply rooted the meat and dairy industry is in our everyday lives. It was interesting to see that the biggest non-profit disease fighting brands, such as Susan G. Komen and the American Cancer Society don’t include any food products to avoid on their websites. Then when you take a closer look, companies like Purdue Chicken and Dannon Yogurt are the biggest sponsors of these organizations.

I have always thought I’ve been a conscious consumer, paying attention to where my food comes from and making sure it was organic, but after watching this film I have realized there is so much more to know. What goes into your body today directly affects the quality of your life in the future. It is amazing the power we have to heal ourselves by just changing to a plant based diet.

This film is not only enlightening, it’s also a wakeup call to the average American who doesn’t think twice about diet. Anderson paves the way for the viewers to come to their own conclusions about  food, without making you feel stupid or guilty. At times you feel yourself hoping that some of these company and organization directors and CEOs would have the best interest of the consumer, but it soon becomes apparent that they have the best interest of their sponsors instead.

Kip doesn’t let you lose complete hope though, with testimonials from doctors, nutritionists, activists and athletes, you are not alone in your concerns. The documentary ends on a high note, describing the new popularity of veganism and how more people are concerned with what they are eating. I would highly recommend this film to those who are health conscious or looking for the truth about how to heal through the food they eat.

To purchase your copy of “What The Health:”