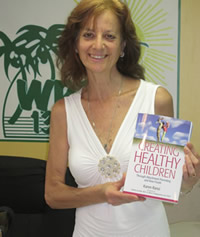 Karen was awarded the Peer-to-Peer Award for Service to Children’s Health and The World Peace Award by the 2014 Raw Living Expo in California. She was also awarded with the Best of Raw Top Professional Simple Raw Food Chef at the Raw Living Expo 2014.

Karen has been interviewed on numerous TV and radio shows on the topics of the vegan and raw food lifestyle, and vegetarian and raw food parenting as well as attachment parenting, and on talk shows of the Gary Null Progressive Radio Network. Karen appeared as one of 40 raw food leaders on host Steven Prussack’s RAWpalooza Raw Food World Summit in January 2012 and again in April 2012 on Interviews with the Raw Food Masters. She was a featured speaker on the “Conscious Foods Summit” broadcast worldwide in February 2012. Karen has been interviewed on numerous other online Summits in 2013 through 2021 including the RAWmazing Life Summit, the Raw for Life Summit with over 20 vegan and raw vegan leaders, the Conscious Mothers Summit, the Vitality Health Summit, the International Raw Food Summit, and the Raw Food Mastery Summits with Drs. Karin and Rick Dina.

Karen was a highlighted speaker for the New York Society of Cosmetic Chemists February 2012 Symposium on “Lifestyle Effects on Skin Health,” and was featured as a speaker at the New York Health & Beauty Expo at the Jacob Javits Center in Manhattan June 2012. She was featured on two episodes of “The Living Healthy Show,” broadcast on 14 cable TV networks. Karen could be heard speaking with radio host Mark Riley of WWRL NY in May 2012 on the benefits of attachment parenting. She was interviewed by host Mitchell Rabin of “A Better World TV and Radio” on August 8, 2012. Karen was the featured guest on author Victoria Moran’s show “Main Street Vegan Radio” in May 2013 and on Dr. Michael Finkelstein’s radio program “The Skillful Living Room” in June 2013, in addition to many more that can be seen at https://superhealthychildren.com/PressRoom.

In 2021, Karen is scheduled to appear on Victoria Moran’s “Main Street Vegan Radio” on October 6th.

Karen has traveled widely on talk and book tours on a mission to educate her audience on the benefits of the vegan and raw food lifestyle and attachment parenting. Karen has presented her classes “The Raw Food Challenge,” “Super Healthy Children,” “Nourishing Ourselves, Nourishing Our Families,” and “Regenerative Foods for Energy and Weight Loss” at numerous seminars, schools, universities, health institutes and festivals throughout the United States and abroad. Karen was the keynote speaker at “The Children’s Health Congress: Flowers of Life” in Pereslavl, Russia, south of Moscow, in June 2012, organized by the Russian Association of the Raw Food Movement and Naturopathy. She has presented as the keynote speaker in the United States, Canada, the UK, Russia, Borneo, Costa Rica, Brazil and Australia.

In addition to her work in nutrition, Karen holds a Masters degree in Speech Pathology from New York University, and is a speech/language/feeding therapist working with children of all ages for over 40 years, specializing with autistic children since January 2002.

Every June, Karen supervises twenty speech pathology graduate students from Northeastern universities as they work with autistic children at Camp Kaleidoscope of Vermont, a unique camp program for autistic children and their families. Karen increases her students’ awareness of the impact of whole food plant-based nutrition on the children’s health and wellbeing, which includes the benefits of a gluten-free/dairy-free lifestyle, eliminating processed foods and eating more fresh raw plant foods.

In 1994, Karen was able to heal her three year old son from asthma, chronic ear infections and multiple allergies, and herself from digestive, pre-menstrual syndrome and skin problems through dietary and lifestyle changes. By means of her education, life-changing personal experiences, and sincere desire to share her message, Karen has been able to guide thousands toward developing excellent health.

In 2015, Karen launched her Vegan Certification Course, an online certification course for vegans wanting to become a qualified health coach in the vegan niche. Students who have taken the course up to this date are from the United States, UK, Japan, Canada, France, New Zealand, Brazil and Iran. To find out more or to register, book a call with Karen at http://bit.ly/karenbookacall   or contact Karen at karen@feelfabulouswithfood.com.

If you are looking for help in creating health for yourself or your child, Karen’s coaching and classes provide you with the support for success. You may choose Zoom, Skype, Phone or In-Person consultations. Karen also gives online and live raw food coaching and recipe programs in New Jersey.

Each person has their own lifestyle background. Karen is able to individualize your needs and assist you from whatever dietary and lifestyle path you have been following. If you would like Karen to speak for your group or to schedule a private consultation or class, please email her at karen@superhealthychildren.com or karen@feelfabulouswithfood.com or call (201) 934-6778 in the U.S.