As many of us know, two important keys to staying healthy are to eat well and to get enough exercise. Whether it be running, biking, dancing, lifting weights, or any other form of exercise, we know that keeping our body moving is important for our health. One man in the raw food community who enjoys performing in triathlons is Nathan Batalion. I was able to conduct an interview with Nathan to find out about his raw vegan lifestyle, his triathlons, and his writing. 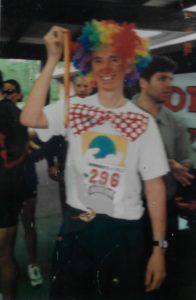 Nathan has been a raw vegan for decades and writes for Healing our World magazine. He also has written over 900 blog posts for www.healingtalks.com and www.raw-wisdom.com, and is the author of 50 Harmful Effects of Genetically Modified Food. He is currently working on a book called Rescuing and Sustaining Our Planet. “This book presents a uniquely evolved worldview of mine. An alternative to Galileo’s quite poorly dreamed-up core math-based mechanical vision of nature, and yet what has led humanity to its current straights.” The book will discuss Nathan’s views on how humans have impacted the earth and the living species on it.

The first question I had asked Nathan for this interview was, What was your motivation to become a raw vegan?

He answered: “The research evidence in support of being a vegan is overwhelming. Support for going for raw/living foods is a little harder to locate. Hippocrates Health Institute is such a rich and unusual resource, given their experience for the past half century. For my own reasoning, I would add the following thoughts: borrowing from the ancient Greeks and leaning on ideas proposed by Renaissance thinkers like Galileo, Descartes and Newton, our modern western civilization has grounded itself in a largely non-living/dead mechanical view of nature’s essence. I have seen how this has given us some superficial advantages as when using factory machines in manufacturing, or for daily transportation and communications – but otherwise the side-effects have tended to make a mess of the rest of alive nature. Including, a mess of our alive biological insides (as evidenced by growing chronic disease epidemics) and so I developed a more life-and-consciousness centered approach to understanding our depths, nature’s depths, and formed an understanding which stands behind a live-food/raw vegan diet being followed. And, in order to be healthier and more whole.”

Next, the focus is on Nathan’s enjoyment of the triathlon. How long have you been doing triathlons?

What got you into doing triathlons?

“I had already been used to swimming regularly at the gym, and it seemed a natural progression from just running, which I have been doing competitively since the late 80’s. The triathlon seems more a whole-body workout.”

How do you train for a triathlon?

“Generally, I train a couple hours at a time at the gym which has a swimming pool and will train 2-4 days during the week before an event, with one to two days rest in between each training. When at the gym, I will start with a swim as events themselves always start that way as well, and for safety reasons. After the swim, I will do one or two of the other main training efforts needed – treadmill and/or gym bike. Sometimes I will road bike, but the gym bike is safer. As an alternative, if I cannot get out to the gym, I have equipment at home as well, but I like the gym company to help inspire. Occasionally, I will lift some weights but not significantly. If the event that is being trained for is a relatively short one or a “sprint”, I will train as if it were a longer event. This past Sunday was only a 350-yard swim, so during the week I trained as if it were an 800-yard event. The biking was 10 miles, so I did 12 miles for the training at the gym, the run was 3.1 miles, so I did 4.1 at gym. This way I am also confident at the time of the race that I can handle it well.”

Do you have any specific MEALS that you eat before a triathlon?

“I eat light, raw living juicy foods. I make a green juice and a grapefruit in the morning, plus a handful of sprouted nuts and sprouted beans. If sprouts have been in the refrigerator for several days, I soak them in ozonated water for 2-5 minutes to get rid of potential growths that feed on that life energy.”

Do you have any pre-race rituals that you do to help you get in the zone for the triathlon?

“First, I plan an adequate amount of sleep the night before, I shoot for 8 hours of sleep. I always train during the week, but not the night before the race. I train at least 2 days a week within the week of a race, though never the day before, which needs to be a day of rest. I also take a shower and do a skin-brush early in the morning before going to the event. I do this with organic soap mixed with tea tree, oregano oil and hydrogen peroxide. Next, as previously mentioned, I have 8-16 ounces of a freshly squeezed green drink. If that is not available then I have the same quantity in a powdered drink – and ideally at three specific times – night before, morning after waking, and finally after a race to help with recovery. I also create a drink with a teaspoon each (as available) of: Wheat grass/bee pollen (which has high levels of land-based nutrients), Blue green algae/sea dulse (which has a high level of marine nutrients), Magnesium citric (which is an essential nerve feeder with calcium gotten from greens & sprouted nuts), Zeolite (a strong alkalizer/detoxer),Turmeric (the most anti-inflammatory of spices); cayenne, if out of turmeric, Sumac sorghum bran (one of highest ORAC/anti-oxidant value). Then, I will add some teaspoons of flax and/or hemp oils – quality energy burning oils. Then, filling the balance of the cup or glass will be purified water and/or organic tart cherry juice. The latter at night, it provides sleep-inducing melatonin and after a race helps with recovery.”

Is there anything you find challenging with triathlons?

“I have to improve my biking, which is usually the longest part of the triathlon. I am dependent on my bike’s performance and am planning to get a little consulting help from the local bike shop for any ways to help me improve its performance.”

Lastly, I asked Nathan, Do you think a raw vegan diet helps you with the triathlons- if at all?

He answered, “Beyond a doubt, I would not dream of doing triathlons without this diet.”

On July 28th, 2018, Nathan Batalion finished his most recent triathlon race, that took place in Duanesburg, New York. This was his third race of the season, and at the age of 69, he was the second oldest participant out of 115 total participants. The race included a 350-yard swim; 10 miles of biking and a 5K run. Nathan loves competing in the triathlon races, however, his favorite part of the race is talking with the other athletes. “I get wonderful feedback and encouragement” he says.

As for the future, Nathan says that he will definitely continue training for and competing in triathlons. The nationwide numbers show the ages of triathlon participants, and how the number in the early 50s starts to drop.

As we age, it can get much more difficult to be active and do the amount of activity that a triathlon would entail. “The problem with aging, rarely taught, is that it can hit one, both psychologically and physically in totally unexpected ways. Thus, it is so vitally important to take preventive measures – dietary, detox, exercise and mental/psychological exercise. None of us live forever, but we can at least be examples for others and leave an inspiring legacy.”